At last we found the cheetahs

While on the look-out for a good viewing of the lion pride, shareholder Woody got a much better surprise during one of his evening drives: Limpopo-Lipadi’s two cheetahs. This is such a rare sight that there are enough shareholders who’ve never put eyes on them during their visits.

“There was not much activity at the waterhole, except for a few blacksmith plovers walking around near the water’s edge, and a flock of red-billed Quelea moving in astounding harmony from a large bush on the far bank to the water and back. I resigned myself to settle in for a few hours of waiting. Then after ten or fifteen minutes of calm Actor suddenly sat up, and exclaimed in a whisper: “Do you see that?”

I looked in the direction that he was looking but saw nothing. Then, as my eyes scanned the area around the opening, there was a slight movement behind the nearest bush.

“It’s a cheetah,” Actor said excitedly, pointing to the spot where the movement had come from. As he did so, there was another movement, and then spots became clearly visible behind the dry branches of the bush nearest us. There are only two cheetahs left on the reserve, and sightings of them are extremely rare. When they were seen, it was usually on the northern plains, an area that was open and where the cheetahs speed gave them an advantage over other predators. The few sightings which had occurred of late were usually just glimpses as they moved through the bush. In twelve years of coming to the reserve, it was the only animal that I had never seen. 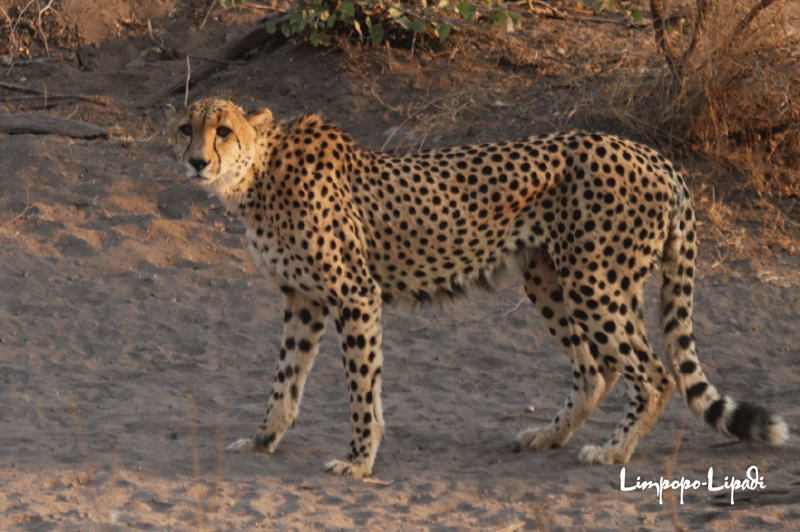 But here was one of them, moving ever so cautiously out from behind the bush towards the waterhole, the head now clearly visible. Step by step it came, not fifteen yards from the vehicle, until its sleek, spotted body was in full view. Then behind it, there was more movement in the bush, and more spots, and soon a second cheetah moved out along side of the first one, passing it and heading towards the water’s edge. When it got there, it looked carefully around to ensure that no other predators were near. Cheetah may be the fastest, but they are also the weakest of the big predators and are at risk not only from lions, but also from wild dog, leopard and even hyena. This cheetah was not about to put its head in the water unless he was assured that no other predator was lurking nearby to challenge him.

The other cheetah moved down beside the one at the water and, following the same cautious observances, put his head down to drink as well.

“Those are thirsty cheetahs, “I said to Actor after we sat there observing them drink for what seemed like an eternity. You could hear the sound of their tongues lapping up the water as they did so. “Thirsty and hungry,” Actor said. He was right that they did both look fairly lean. Finally, having satisfied their thirst, the two cheetahs moved back from the water’s edge. But rather than moving off back into the bush, they both plopped down in the sand, like two beachgoers enjoying the late afternoon sun. Not an apparent care in the world, and evidently not in a rush to go anywhere. 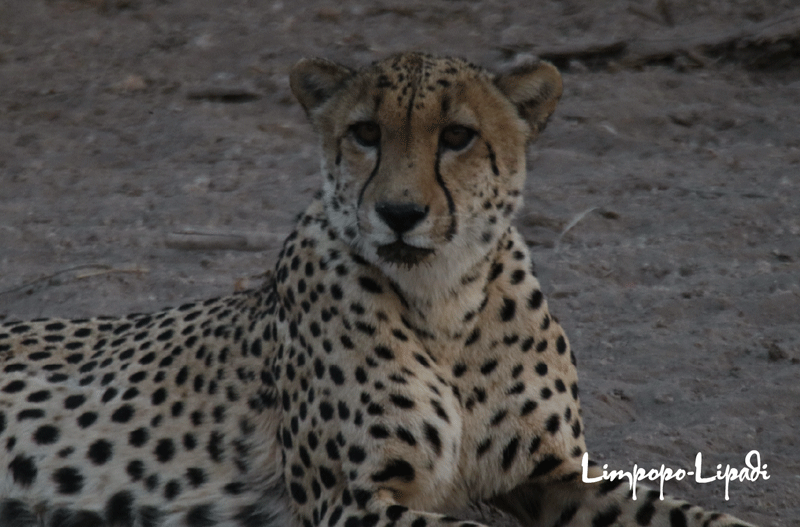 “I have never seen them like this,” Actor said. The smile on his face and the sound of his voice indicated that he was truly enjoying the experience as much as I was.

We sat and watched them for over an hour until the sun started to fade. One of the two finally got up and wandered out through the opening from where they had come, but the other stayed put. Then within a few minutes, the one that had wandered off reappeared on the other side of the waterhole as if to give us another opportunity to view him up close.”